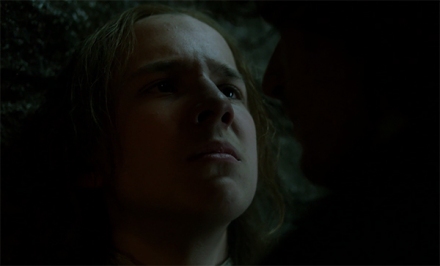 This week’s blog is very choppy. In some places, I just wrote a single sentence. Other elements got more attention. I don’t have time to re-watch the episode and do a more thorough job. My daughter has her big dance recital today and my husband is away for work, so one viewing is all I have time for!

If I get the chance later this week, I’ll come back and flesh this out. What you’re seeing is my initial gut-reactions, that I typically tweak and expand after my second watch. But it might be interesting to see those, anyway.

Nice title card, reminding us that Claire was in WWII. It has been said that all wars are the same war, being fought endlessly.

Murtagh’s wink at Claire is so sweet!!

Willie got married and isn’t here? Who is going to witness Jamie killing Dougal? I really thought that was the point of making him a bigger character last season?

Seriously, show. Dougal is right. There really is no time to waste. So why are we wasting this episode on something completely pointless?

Drill Sergeant Murtagh? Also, the snow in the air proves that this is really the wrong season.

Not sure how I feel about the training montage(s).

I like that Jamie is more interested in the welfare of his men in particular than the Cause overall, or what he can gain by being near the prince.

The origins of JHRC! I wonder if this is something they made up, or if it’s from DG’s notes.

I am starting to figure out what they’re trying to do in this episode – to pit the old Highland ways against modern warfare. Because the truth is, the Highland Charge is going to be broken with terribly efficient and brutal ease at Culloden. Jamie is right – Prestonpans and their other wins worked because of a mixture of surprise and good fortune.

Claire tries to psychoanalyze Dougal, but she isn’t entirely successful. Her own psyche is too troubled. I’m not sure how I feel about what they’re doing with Claire this episode. PTSD is a real thing, but Claire has always dealt with hers by compartmentalizing, by fracturing part of herself and focusing on the immediate, literal dangers and problems. She turns off emotion and then deals with it later. In the post-show behind-the-scenes, Matt B. Roberts talked about how PTSD can be triggered years after the fact, so, again, I believe that this really happens to people. I just think Claire already has a coping mechanism for hers. I also think that, while her conflict speaks to tone and theme, it doesn’t do much for plot or even much for characterization. Claire isn’t transformed by what happened. Rather, it reinforces her beliefs and convictions. So while it is interesting, I don’t know what it adds to the story.

I really, really don’t like that they changed the reason for Ross and Kincaid’s lashes. The men were brought in by Dougal. Why shouldn’t they have believed they were supposed to be there? Jamie’s punishment seems unduly harsh. It makes sense to punish them – and himself – for Lord John (or William, as he calls himself at this point) managing to enter the camp and attack. That is a totally legitimate dereliction of duty. This is…not.

After watching the rest of the episode, it’s clear that they were: 1) putting Dougal’s men on sentry duty with weighted emphasis and 2) establishing the penalty for this kind of infraction, but I think we all understand that corporal punishment was used at this point in history for military discipline. No need to flog two men who didn’t really do anything wrong in order to justify doing it later to Jamie. Or, if you want to contrast the two floggings, make the first one for a real offense.

Claire’s dialogue attempts to anchor us into a more specific time – for two years she’s tried to stop this war.

I am confused about why they added them swearing that Claire wouldn’t be alone again after she tells Jamie about her WWII experience. He already asked her to promise him that she would go back to the 20th century if things got bleak. He’s going to hold her to that promise. I don’t like that he’s going to break this one. Unless he decides that it isn’t alone as long as she’s pregnant and is going back to Frank? But that’s the letter of the vow, not the spirit of it. Dislike.

Why change the Lord John scene from him attempting to help Claire to just attacking? It makes it feel much more awkward when Claire happens along and starts the farce that she’s being held against her will. Maybe it’s just that I dislike whenever Claire tries to pull one of these scenes (like lying to BJR about Sandringham, faking her vision last episode, etc.). It made sense to me in the book that Jamie really didn’t want to torture this boy, especially since he didn’t yield at first, and was looking for a way out of it. The fact that John had attacked to protect Claire in the first place was what gave Jamie the idea to use her to coerce him.

I can see that Claire’s trying to do the same thing in the show, but why does she think it will work? It is nice that Jamie picks up on Claire’s idea and jumps to use it, because it’s always nice to see Claire and Jamie working together, but it doesn’t feel particularly motivated. And, sigh, here’s another threat of rape, even if it’s not a real threat and is being used as an alternative to torture.

Also, Lord John never finds out in this version that Claire is actually Jamie’s wife. So his little speech at the end isn’t motivated by the same feelings of shame and humiliation. He’s unhappy at being forced to give up information, but he would feel justified because of the inducement. We could have trimmed a few training montages and allowed him to ask, as he does in the book, what assurance he has that they will let the lady go. And then why not allow Claire to treat the broken arm? This is their first interaction of what is going to be a long and very fraught relationship. It needs to be…more.

Not that I advocate for keeping things just because they set up something in the future. I honestly feel that the scene in the book works to establish character, and it is plot-relevant because of the cannon and the upcoming battle. I can’t imagine why it was trimmed and changed so much. Although I did love when he shouts that he isn’t a spy, since I know what’s in his future. 🙂

I don’t mind adaptive changes when they enhance the story, bring out unexpected nuances, or fix minor problems in the source material. But this show has started to create problems for themselves that they’re going to have to solve in unnaturally twisted ways if they want to keep the broad strokes of the story intact (which they say they want to do).

In aggregate, I’m really not sure what this episode adds to the overall story. I guess it is trying to show Jamie changing from a Laird into a General, not just in the eyes of his men, but particularly in the eyes of Dougal. But I still feel that most of what happened wasn’t necessary and didn’t advance the plot. A much shorter training sequence, then Lord John, and then the battle of Prestonpans could have all fit neatly into this episode.

But perhaps my feelings will change when I get the chance to come back and watch again. I won’t be live-tweeting tonight, but I hope everyone has fun watching and tweeting!

Outlander Season 4 Is Almost Here!November 4th, 2018
Droughtlander is finally over!

On the Feminist Romantic podcast, I discuss romance in various forms of narrative--including the Outlander books and television series. Click the pic to go to my podcast website, or click here to subscribe on iTunes.