We have episode titles for Season Three, and that means some adjustments to my episode breakdown. I am getting a lot of traffic going to the blog where I did the breakdown and I’ve put a note there to go to the Season Three Speculation page instead.

In the meantime, I want to rant a little about my feelings now that the titles are revealed. Here they are, in case you don’t want to read through the whole breakdown to see them:

So, if you’ve read the books, you understand why I’m peeved. “A. Malcolm” is clearly the episode where Jamie and Claire are reunited…and it’s halfway through the season.

Any way you look at it, that is just a bad idea. Storytelling-wise, it’s terrible. Even Gabaldon got Jamie and Claire back together before the end of the first third of the book. They are the heart of this series, and if they expect us to stick around through several more seasons as the story starts to splinter, they need to make that heart solid–which is not accomplished by that timeline.

Even looking at it logistically, it doesn’t make sense.

My copy of Voyager has 870 pages. Chapter 23, where Claire travels back to 1766, begins on page 244. I assume the episode will cover material through chapter 25, which ends on page 289. That number divided by six episodes is about 48 pages per episode. There are 580 pages left in the book to be divided over seven episodes–which is a whopping 83 pages per episode.

I don’t even know how they’re going to do that unless they strip out several subplots. Although, to be honest, I wouldn’t mind losing the Fiend storyline, which will save some time both in Edinburgh and at the end–although it will also mean losing the conjuring scene with Margaret Campbell, too.

Some people have also speculated that the season will end on a cliffhanger somewhere before the end of Voyager, but from the title of the last episode I am pretty sure it will end where the book ends. Technically the West Indies are part of the “New World,” but I feel somewhat confident in applying it specifically to America in this instance.

But I’m not even sure how I feel about that, because it means they’re going to try to shove so much of the book into so little episode time.

The only thing to do now, though, is what and see what they do. I wish I believed I could trust the writers implicitly, but they’ve already proved that they don’t always make choices in service of the characters and the story. Sometimes they go for spectacle and shock value, and that’s not interesting to me at all.

Need something to get you through these last few days until Outlander begins? You may like my Fay of Skye series. Set in an alternate Victorian Era, the books are full of magic, romance, Scotsmen, and strong women who know what they want and aren’t afraid to fight for it.

The series starts with Essential Magic. A Theft of Magic and Memories of Magic are already available, and the fourth book, Secret Magic, will be released right after season three ends. Check out Essential Magic now! 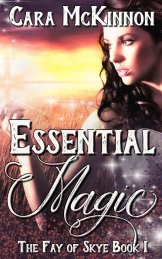 Outlander Season 4 Is Almost Here!November 4th, 2018
Droughtlander is finally over!